Here's Why Mantis Shrimp Boxing Can Be Faster Than Bullets 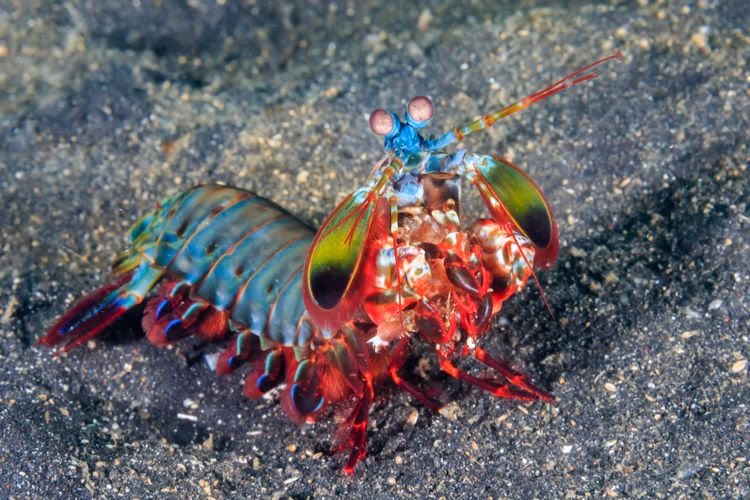 Technological developments are usually inspired by nature and animals. This is what inspired an American researcher to observe the mantis shrimp.

The mantis shrimp that lives in the deep sea is a member of the order Stomatopods. Species whose body length can reach 30 centimeters are known for their superiority in fighting.

The brightly colored shrimp have two deadly weapons used when looking for food, namely claws and fists. They will break the shells of clams, crabs, or snails belonging to molluscs using their fists, and their pointed claws are used like spears to stab prey.

In the large mantis shrimp, its claws can even cut a human finger, while its fists can reach speeds of 80 kilometers per hour and have acceleration faster than 22 caliber bullets. No wonder this animal is declared the owner of the fastest punch in the animal kingdom.

As reported by the International Business Times, Tuesday (16/1/2018), the sentadu shrimp can hit its enemy up to two times very quickly and without further ado. The impact is quite heavy, and can penetrate aquarium glass. Weapons that can destroy hammer-like enemies are known as dactyl clubs or dactyl clubs.

The strength of the sentadu shrimp inspired researchers to create ultra-strong materials that could be used for the aerospace and sports industries.

In a study published in the journal Advanced Materials, January 2018, the researchers also found that although the sentadu shrimp exerted a tremendous amount of force, it did not injure itself and the weapon was not damaged.

The researchers examined the content in the sentadu shrimp weapon that is capable of destroying its opponent to be developed as a tool that can be useful for humans. Research by Dr David Kisailus of the University of California, Riverside and colleagues has shown that their weapon array is extremely complex.

They strip one of two regions in the ductile club called the striated region. The area has a series of fibers that are highly aligned and serve to protect the ductile club from impact forces.

"We believe the role of the striated area protected by fiber is very similar to the gloves that boxers wear when fighting. This is as durability to prevent accidents," said Kisailus.