Home » funny » people » Story » unique fact » a child walks 4km to school in the cold, after that his hair freezes

a child walks 4km to school in the cold, after that his hair freezes 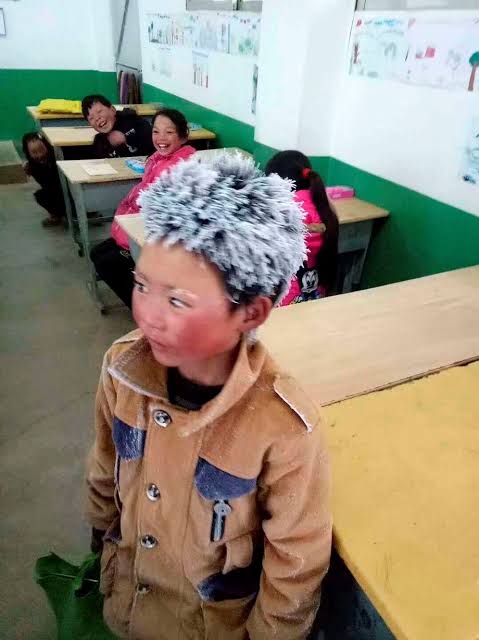 The story of Chinese students going to school despite winter conditions has gone viral on social media. This eight year old boy's hair froze after walking 4 km to school.

The photo of Wang Fuman arriving to his class along with the headmaster, Fu Heng, responded. The photo shows a layer of ice forming on her hair and eyebrows.

According to local media reports, the third grade elementary school (SD) boy was desperate to brave the cold temperature of minus 9 degrees Celsius.

He walked 4.5km for an hour from his home to school in Shaoton, Yunnan Province, to take the exam. In the photo, his classmates can be seen laughing amusedly at Wang Fuman's hair.

Fu Heng on Tuesday (9/1/2018), said that it was the first day of the final exam and the temperature dropped drastically within half an hour. However, Wang Fuman still made trips to school.

The little boy lives in a house in Ludian with his grandmother and older brother. The family's economy relies on Wang Fuman's father who is a migrant worker in another city. While his mother had left the family.

Other photos shared on social media also show the boy's hands becoming dry and wrinkled. He also suffered from the cold.

The boy told a Pear Video reporter that apart from being at school, he also helps his grandmother work in the agricultural sector, so her hands are rough.

He admitted to missing his father, whom he had not seen for several months. Many netizens sympathized with the boy's plight.

They went through social media Weibo encouraging Wang Fuman to study hard to change his fate.