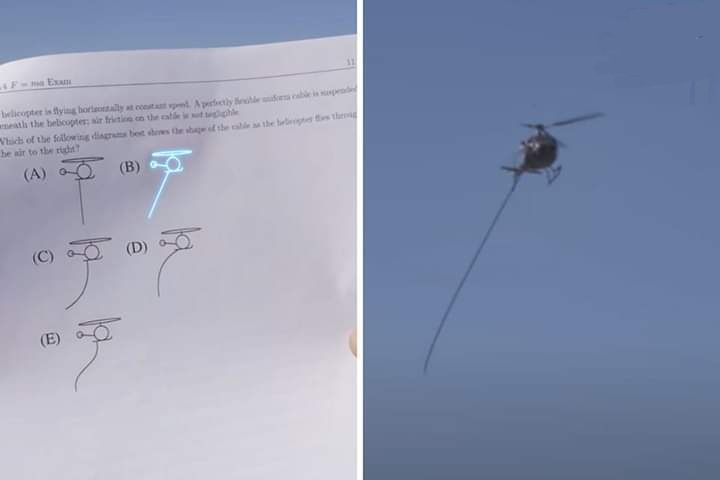 A YouTuber rented a helicopter to be able to answer a physics hypothesis question that was viral and controversial. That YouTuber is Derek Muller, owner of an educational YouTube channel called "Veritasium".

The question that Muller is trying to answer is multiple choice question number 19 of the 2014 US Physics Olympiad team qualification exam.

Actually this question became viral and controversial only because many people disagreed with the original answer.

As for the voice of the question, it reads:

A helicopter flies horizontally at a constant speed. A very flexible cable hangs under the helicopter. Air friction on the rope cannot be ignored.

Which of the following diagrams best shows the shape of the cable as the helicopter flies to the right in the air? 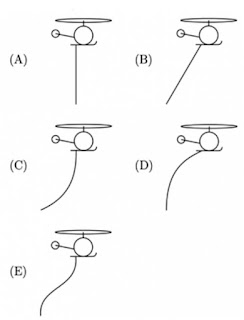 While the multiple choice of the question is as follows:

A. The rope forms a straight downward pattern

B. The rope forms a diagonal pattern to the left

C. The rope forms a curved pattern to the left, similar to the letter "J"

D. The rope forms a curved pattern to the right, like the letter "J" upside down

E. The rope forms a curved pattern like the letter "S".

Muller posted a video showing his attempt to answer the question.

Muller was seen boarding a helicopter to conduct a hands-on experiment based on the question.

Before revealing the right answer, Muller conducted a poll on YouTube regarding which answer was the most appropriate according to his followers.

In addition to "C", the answer options that were most voted on were "B" (25 percent) and "D" (21 percent). While options A and E were chosen by only 8 percent and 7 percent of respondents, respectively.

So, in your opinion, which answer is the right one?

To be able to answer the controversial question, Muller uses a rope that is often found in the fitness center (gym), along 15 meters with an overall weight of 20 kg.

When the helicopter was airborne, the rope was lowered so that it dangled down. Then, according to the scenario mentioned in the problem, the helicopter that Muller was riding in was moving to the right at a constant speed.

As a result, the rope forms a straight diagonal line to the left. Therefore, the correct answer to this controversial question is option "B".

The answer generated from Muller's experiment is exactly the same as the original answer to the question.

In the solution sheet uploaded on the official website of the American Association of Physics Teachers, (AAPT) question number 19 has the correct answer "B".