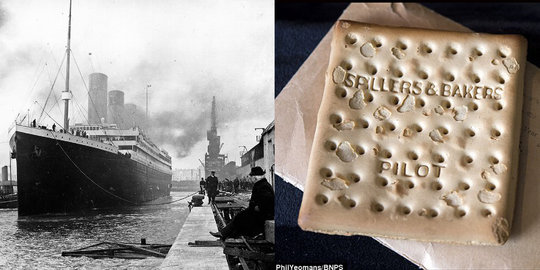 Biscuits are snacks that are easy to find and the price is relatively inexpensive. But what happens if a biscuit is valued at USD 23,000, do you want to buy a biscuit for that price?

Then what is the reason the price of these biscuits can be that expensive? Is it because it is encrusted with diamonds and gold?

Apparently not, which makes these biscuits expensive because he is a snack that is still intact and survived the tragedy of the sinking of the Titanic in 1912.

Reporting from historydaily, these biscuits survived by riding a lifeboat, aka carried by passengers, so they didn't walk alone. Haha...

These biscuits with the words 'Pilot' in the center are produced by Spillers and Bakers, which is known as a company that produces biscuit food for dogs. Besides being known for making dog biscuits, this company was also known for making inexpensive emergency food for wartime which was still common at that time.

The biscuits, which became an expensive meal, were kept as souvenirs by passengers on the RMS Carpathia, namely James and Mabel Fenwick. They were on their way to Europe for their honeymoon when their ship was called in to help the victims of the Titanic. James then carefully stored the biscuits in a Kodak film envelope along with a note that said, "Pilot biscuits from Titanic April 1912 lifeboat".

In addition to storing these biscuits, the couple also keeps a negative photo about the rescue operation for the victims of the sinking of the Titanic.

Finally after a century, these biscuits are auctioned off in Devizes, Wiltshire. The new owner of this 'edible memorabilia' is a collector from Greece.