Long neck, the secret of beautiful women of the Kayan tribe in Myanmar

Like Indonesia, Myanmar consists of various tribes and ethnicities. One of the famous tribes among tourists is the Kayan Tribe or also known as the Padaung Tribe.

In addition to their place of origin in the Kayah region, this Kayan tribe can also be found in the Inle area.

Besides the lake, another attraction of the Inle area is the existence of this tribe. They produce handicrafts in the form of traditional Myanmar woven fabrics.

When traveling by boat on Inle Lake, usually the boat driver who acts as a tour guide will invite tourists to stop by the Kayan Tribe's cloth making site.

There is a unique tradition passed down from generation to generation in the Kayan Tribe, namely that women have long necks.

The long neck is formed because they use a kind of ring made of brass which is arranged to pile up and cover the neck.

Kayan women have worn these brass rings from a young age until they are old. Every year, the brass rings around Kayan women's necks grew and grew, making their necks even longer. 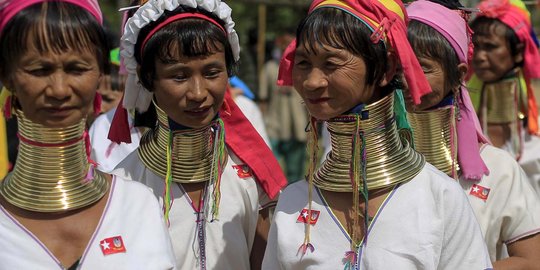 Kayan women attend political campaign in Myanmar
Is this the Origin of the Kayan Tribe Tradition?

Many stories are the reasons for using the ring around the neck. It is said that they are descended from dragons, so they deliberately lengthen their necks to commemorate their ancestors.

However, there are also other myths and legends that give rise to this tradition. Some have said that the brass ring was used to protect themselves from tiger bites.

There are other stories that mention to make women unattractive so they can avoid crime. However, what is more believed is that the longer their neck, the more beautiful and attractive they will be in the eyes of men.