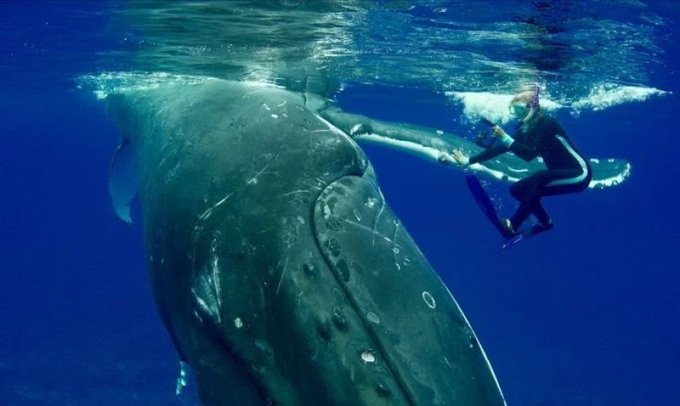 A giant humpback whale was caught on camera helping humans free from a swarm of tiger sharks.

The mammal lifted a diver out of the water in the Pacific Ocean to avoid being attacked by the predator.

It was marine biologist Nan Hauser who had this experience.

The 22-ton whale's head literally popped out of the water to save Hauser from the 4.5-meter-long shark.

The humpback whale repelled the shark with its tail. Meanwhile, Hauser, who was filming the incident, held the whale's head up and swam following the whale's direction.

The 63-year-old woman believes that it is evidence of the whale's instinct to protect other species, including humans.

"At first I had doubts as to why the whale was approaching me, but the fish didn't stop pushing me for more than 10 minutes.

It felt like hours. I was a little hit," said the native of Cook Island, New Zealand.

Hauser himself has been a diver for 28 years and encountered whales. But this was the first time he had met a whale he wanted to ride.

"He wanted so badly to put me on his head, stomach or back. But most amazingly, he tried to tuck and protect me under his big pectoral fins," Hauser said.

Even so, Hauser had to dodge the whale as it swam closer to him. Because, said Hauser, the organs and bones of his body could be destroyed.

"If he manages to hold me under the pectoral fins, I'll drown," he said.

Source: YouTube/Caters TV
He also will not be friends with the whale because it is dangerous.
"I feel a very close kinship with animals, but regardless I try to stay calm and find ways to get away from them," Hauser said.
Hauser said he was not aware that there were sharks in the sea where he was diving.
He was too focused on filming the giant back whale. The tiger shark was the size of a pickup truck, according to local fishermen.
After the whale escorted Hauser to his boat, he was even more amazed that the fish signaled to make sure he was safe.
The biologist hopes the recording will spark more research and awareness of the whale's personality.
Humpback whales often save seals from killer whales by hiding them beneath their flippers.
Even humpback whales will continue to help even at the risk of their own lives.